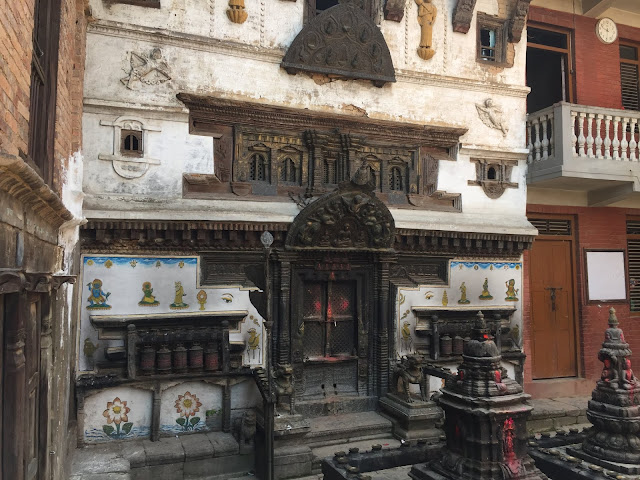 Dedicated to Gautam Buddha Inacho Baha is yet another Mahavihar located at Inacho. The Baha was built in 1671 A. D. next to Patiga Hiti.  The baha is one of the few well preserved in Bhaktapur. The doorway of the shrine is marked by two stone lions. The doorway is surmounted by a metal torana depicting the Buddha (Aksobhya), flanked by Dharma (Prajnaparamita) on the right and the sangha (Sadaksari Lokessvara) on the left. Enshrined Aksobhya, the Kwapadyo in this baha faces west. The exterior of the first storey displays a fivefold carved window (pasukajhya) flanked by two smaller windows. Wood carved struts support the roof depicting five Buddhas. Three chaityas in the center of the courtyard are from late Malla period. Oil lamps run around the middle chaitya. A relationship between Vajracharyas of Chatubrahma Mahavihar and Indravarna Mahavihar is on an intellectual level. The Vajracharyas of Indravarna Mahavihar are considered as the teachers. At Inacho baha, on the full moon day in Bhadra the in-charge of guthi has to participate in the feast organized by Samyak Mahadan organization. Here, traditionally ‘Mulacharya’ bhai puja takes place during chaitya ‘busandha’ on the day of ‘kwatipunhi.’

The sangh of Inacho vihar is extended with hundreds of members who are known as Buddhacharyas. For a month the member families turn by turn take care of the baha throughout the year. ‘Chuda karma’ is performed to sons of the members in this baha. The lineage deity of the sangh is Guheswori who was brought from Guheswori shrine at Pashupatinath to reside in its present place at Sidhi Pukhu. Festivals take place in this baha during Biska jatra and Gunla.


Posted by Krishna House at 1:19 AM No comments: 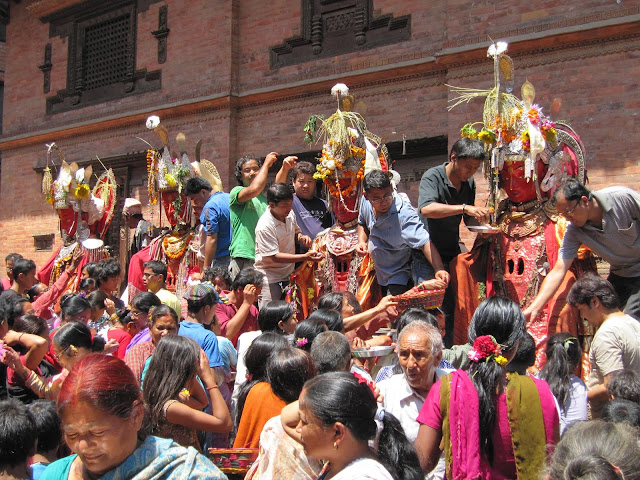 Panchadan celebrated on the day of ‘Krishna Trayodasi’ in the month of Srawan (August/September). In Bhaktapur Panchadan is celebrated differently. Annually, on this auspicious day five statues of Dipankara Buddha are decorated and manually carried around Bhaktapur backed with traditional music known as ‘ponga.’ During sacred tour the Dipankars stop at predetermined places such as Dattatreya square, Golmadhi, Sakotha, Dudhpati and Taumadi where offerings of food: mainly grains and fruit are presented to them. Once they reach Sakotha they are showered with holy water and flowers. Ultimately, at Kuthu bahi, puja takes places.‘Pancha dan’ actually means offerings of flowers, fruits, grains grown on earth. In Bhaktapur both Buddhists and non-Buddhists provide offerings to Dipankars with immense pleasure. Offerings are also given to the monks and tutelary priests by the laity and in return, they bless the providers. Five types of items utilised at Panchadan are: incense for ‘puja,’ food includes wheat, rice grains, pulses, lentils etc, jaggery and fruit juice. Offerings of medicinal food includes ‘amala,’ ‘hal.’ Salt, oil and regular usage materials include needle, thread, rope, white cloth, brooms, chalk, ‘kasaya bastra,’ seat. During this event money is also gifted. Every year prior to two days of the auspicious day of Pancha dan father's day (Buwa ko mukh herne din) takes place according to the lunar calendar.

The story of Bhaktapur Dipankar Buddha goes like this: In the city of Ambarapati prince Dipankar was born to the King Sudev and the Queen Sumedha. The prince spent 1000 years as a householder. In the course of his life he sees the old, sick, dead and a monk. Hence, he felt sad and renounced worldly life. Initially he meditated for ten months and achieved ‘das paramita,’ became aware of four noble truths and eventually enlightened converting to ‘Samyak Sambuddha.’ According to Jataka tales Dipankar Tathagat is senior to Sakyamuni Buddha therefore, Dipankar Tathagat is regarded as the main Buddha.

The word ‘dan’ connotes to give something; it could be religious gifts or anything usually useful given to the needy. Anyone can give ‘dan’ with clean mind. From the perspective of Buddhism offerings include inviting monks for a meal/s, providing needy materials to monks such as chibar, bastra, diyo, pindapatra, ausadhi, chhata, jutta etc, giving land to build stupa, vihar, physical necessities, labour and money and also to serve the old, sick and poor people selflessly.

Among ‘Das paramita’ or ten Buddhist perfections ‘dan paramita,’ is the foremost. To achieve ‘dan paramita’ one has to detach completely from loved family members and sacrifice one’s physique if needed.

Buddhist laity depending to their capability prepare offerings collection at their associated vihars or homes on Panchadan. Around these accumulated offerings figures of Dipankar Tathagat, Buddha, Boddhisatwa, Tara, Lokeswara, Karunamaya, Basundhara and other deities are displayed.

Panchadan parva in Bhaktapur is not only related to Sakya, Vajracharyas but also Manandhar, Prajapati, Suwal, Duwal, Chitrakar etc of various castes’ guthi are related. Not only this but all newars of Bhaktapur regard Panchadan as a festival. 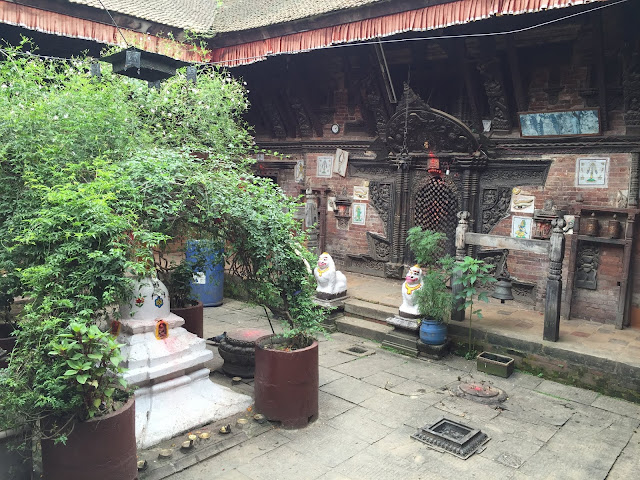 Because it is located just off the east area of the Bhaktapur Durbar Square Chaturvarna Mahavihar is visited by tourists more compared to other vihars. The baha architectural structure of Chaturvarna mahavihar is original. It is one continuous building surrounding a courtyard. The main entrance from the street is guarded by metallic lions. Wooden torana over the doorway depicts Lokeswor. The doorway opens to ‘falcha’ facing the courtyard. Opposite the main entrance and towards the south is Sahasrabhuja - Padampani Lokeswore, kwapadya.  The entrance of kwapadya is flanked by two stone lions and bells. The metallic torana depicts Sahasrabhuja. The shrine of Dipankara is located in the northeast corner of the complex. By its side there is a ‘falcha.’  A traditional eatery at the southeast corner offers ‘wo’, a newari pancake made of lentil. The courtyard is square-shaped with a miniature stupa at the center, a stone carved mandala, chaitya atop a pillar and a small tree. At the western space of the courtyard there is a prayer wheel and the rest of the space is used for recitations during Gunla. The origin of the Baha is dated back to 1478 A.D. Tadhichhen is exemplary of how a baha originally looks.
‘Chudakarma’ ritual takes place here to sons of many members of baha sangh. Initially, the Tadhichhen baha consisted of eighty-two families. Religious rites take place twice a day. Just outside the wall of Sidhapokhari in the north side goddess Guheswori is placed. She is the lineage deity of the sangh. On ‘dugu puja’ or Diwali, the members come here to worship every year. In Magh, a festival takes place inside the baha.


Posted by Krishna House at 2:56 AM No comments: 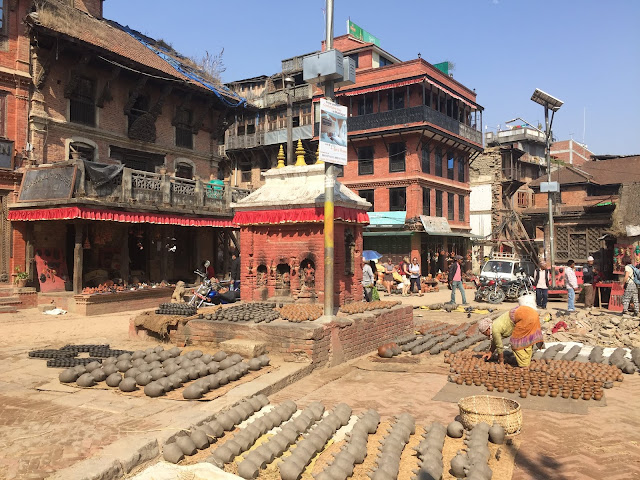 Pottery, an extraordinary craft of Bhaktapur, still practiced today plays a part of living cultural heritage. At 'Talako' the pottery square the art of pottery is displayed with expertise handed down as family trade from one generation to another for centuries.

The earthen artifacts created on potter's wheel are mostly utensils used for religious, cultural and daily purposes. To make their wares the potters use black clay, a special type of clay dug from the fields around Bhaktapur. The clay mixed with sand and water is molded and placed at the center of the potter's wooden wheel. The potter uses a stick to rotate the wheel to an ideal speed so that he can use his both hands to create his crafts, which are later dried out in sun and ultimately put inside traditional oven to bake them ready for use.

During Gai Jatra, the cow festival in August the potters rejoice in the evenings by performing Bhairav dance. The dance is exclusively performed by the potters and is among special dances of Bhaktapur.

In the square there is a shrine dedicated to Lord Jetha Ganesh. On auspicious occasions like 'Keta puja' a ceremony which the boys undergo to be recognized as adults the potters of the area come to this temple for puja and blessings.  The temple is also important for 'Ihi' ritual in Bhaktapur. For this particular ceremony puja has to been done here and black clay as blessings of Jetha Ganesh has to be taken to the place where 'Ihi' for the girls is to be performed.

Posted by Krishna House at 2:51 AM No comments: